1. Start
2. Lessons
3. Games
4. Tests
Text 0
Text 1
Text 2
0/5
5
MIX AND MATCH
Aim: To match pictures to written words
Method:
Drag the picture over the right box to tidy up the play room. Points are added and taken away automatically. Click the boxes to hear the language for each box.
CHANGE
TOPIC
PLAY
CURRENT TOPIC
Prepositions
GAME OVER
PLAY
again
CHANGE
game
do
TEST
loading

MIX AND MATCH game to learn Prepositions in Spanish

With our Mix and match game for "Prepositions" you will be learning the Spanish vocabulary for the topic Prepositions. The language you will learn is in the vocabulary list below, and consists of 20 Words and phrases for describing the relationship between objects.

Well, you can work that out by comparing the picture on the block with the Spanish writing beneath each of the boxes - you should drag the block into the box whose Spanish text matches the picture. 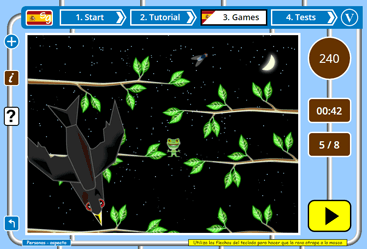 Learn Spanish with the little frog !

You can listen to the spoken Spanish for each word or phrase by clicking on the individual boxes. There are 5 blocks to clear up - but if you put them in the wrong boxes, there will be more... Anyway, tidy is good and practicing Spanish is better so start now and see how you get on...

This game reinforces the Spanish you learned or revised in the lesson by asking you to match each picture to the correct word or phrase. If you are older you may not like the childish reference to toys, but don't worry - there are other games to play and who knows - you might like a trip down memory lane?

How to play Mix and match to learn Prepositions in Spanish