1. Start
2. Lessons
3. Games
4. Tests
0
0 sec
A
B
C
D
1
2
3
4
5
FOUR IN A ROW
Aim: To get four symbols in a row
Method:
Choose a square and click on it. Click on the matching words in the box that appears. If you are right the picture is replaced by a tick. Continue until you have won four squares in a row.
CHANGE
TOPIC
PLAY
CURRENT TOPIC
Go - which way?
GAME OVER
PLAY
again
CHANGE
game
do
TEST
loading

4 IN A ROW game to learn Latin American Spanish: Which way?

Match pictures to texts to win 4 cells in a row from a grid of 20 cells.

With our Four in a row game for "Which way?" you will be learning the Latin American Spanish vocabulary for the topic Which way?. The language you will learn is in the vocabulary list below, and consists of 10 Phrases that say which way to go.

How to play 4 in a row to learn
Which way? in Latin American Spanish 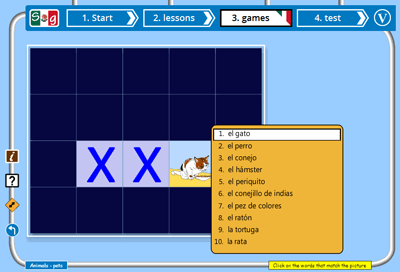